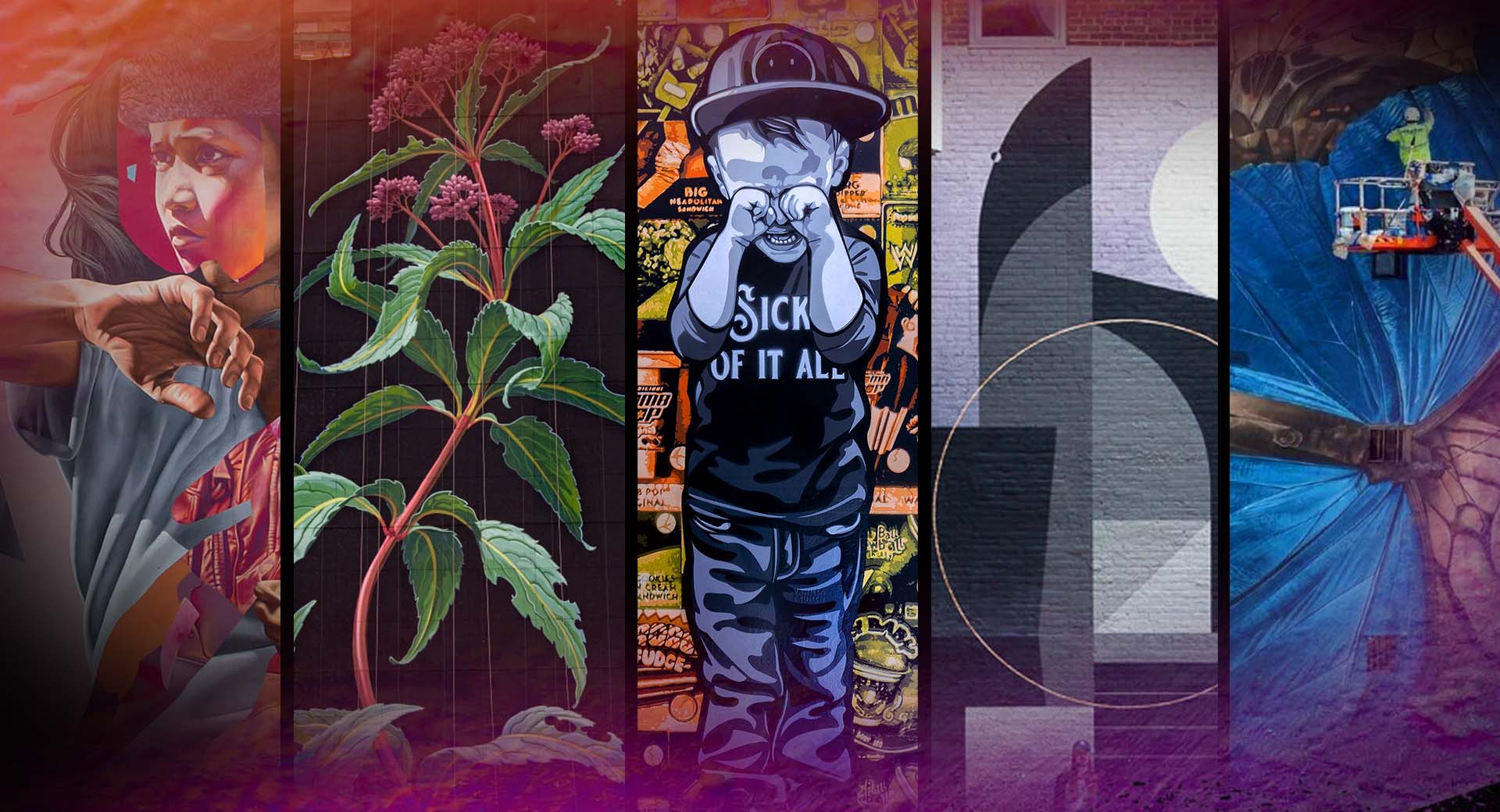 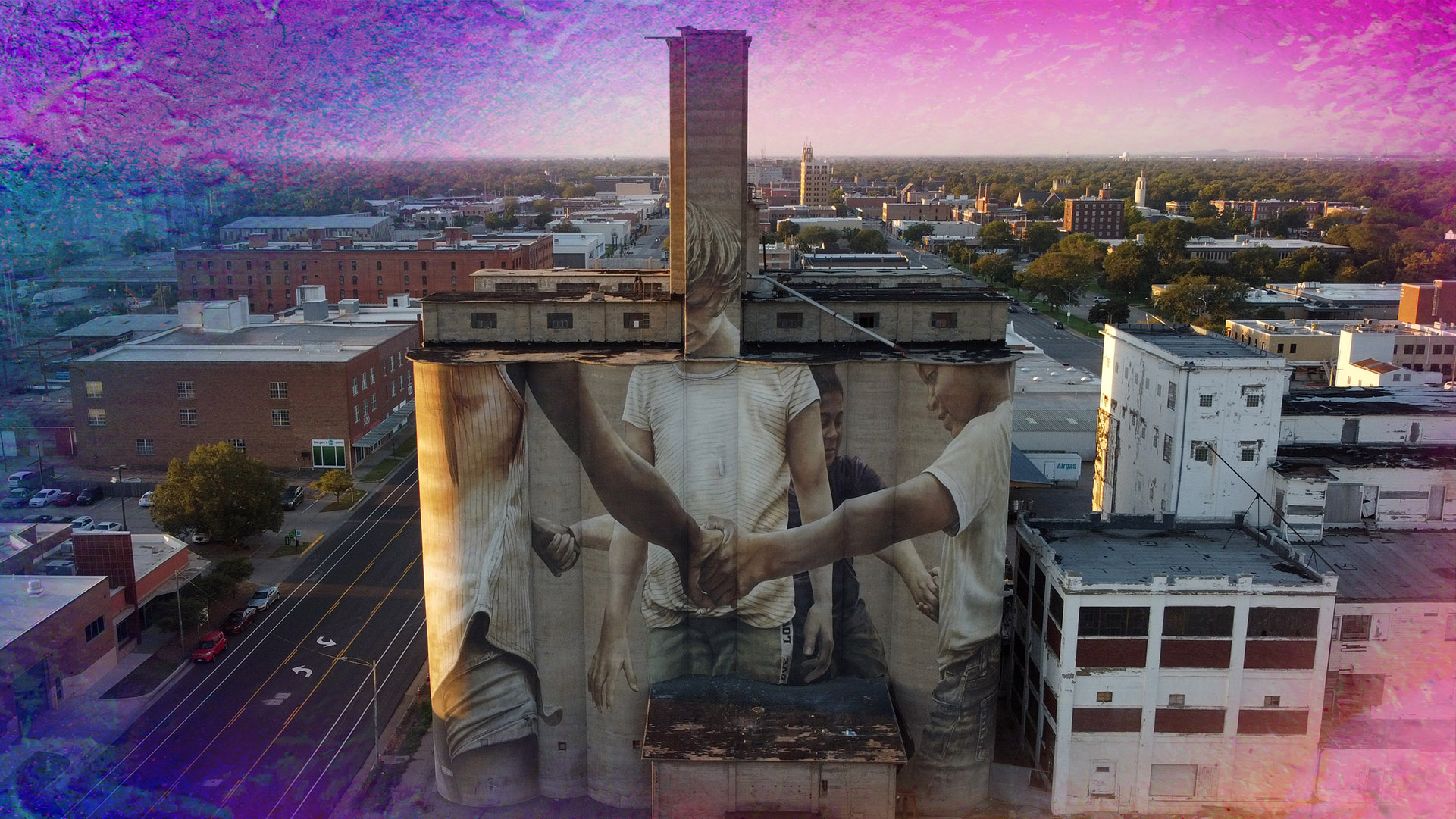 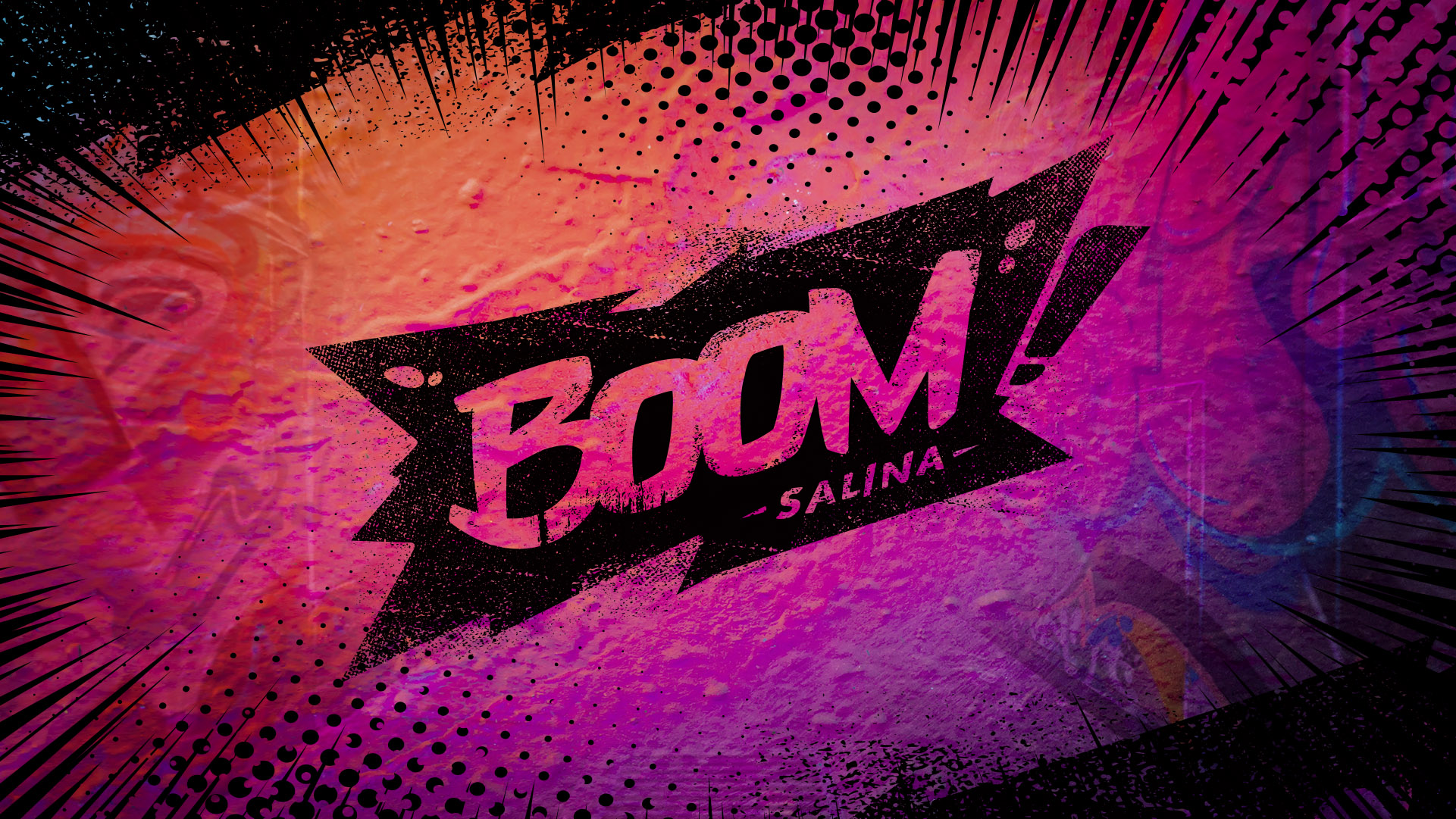 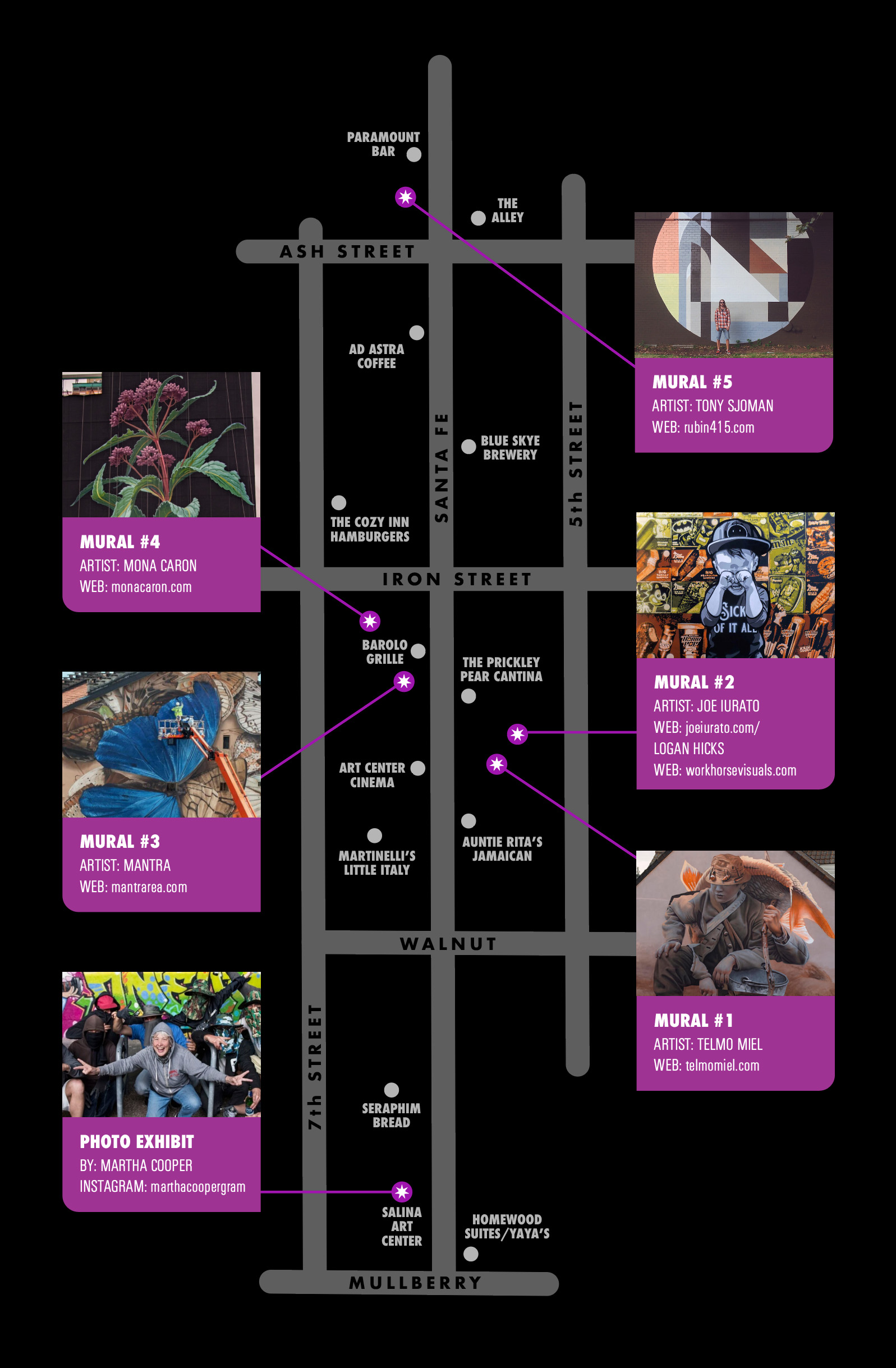 Don't miss out on the action by following the event calendar below for key festival dates and other community activities. 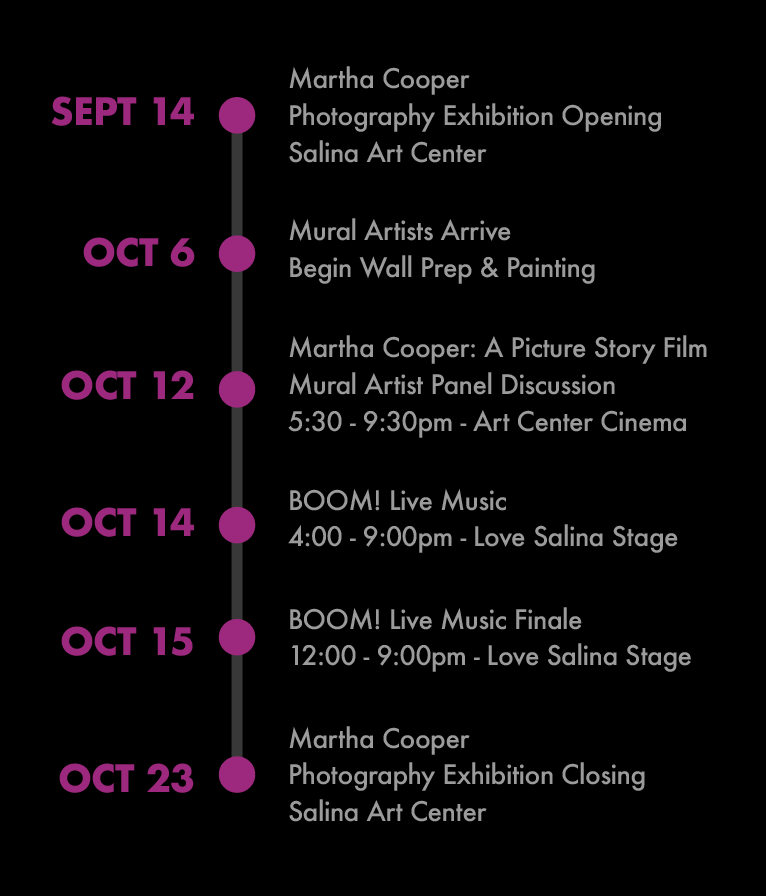 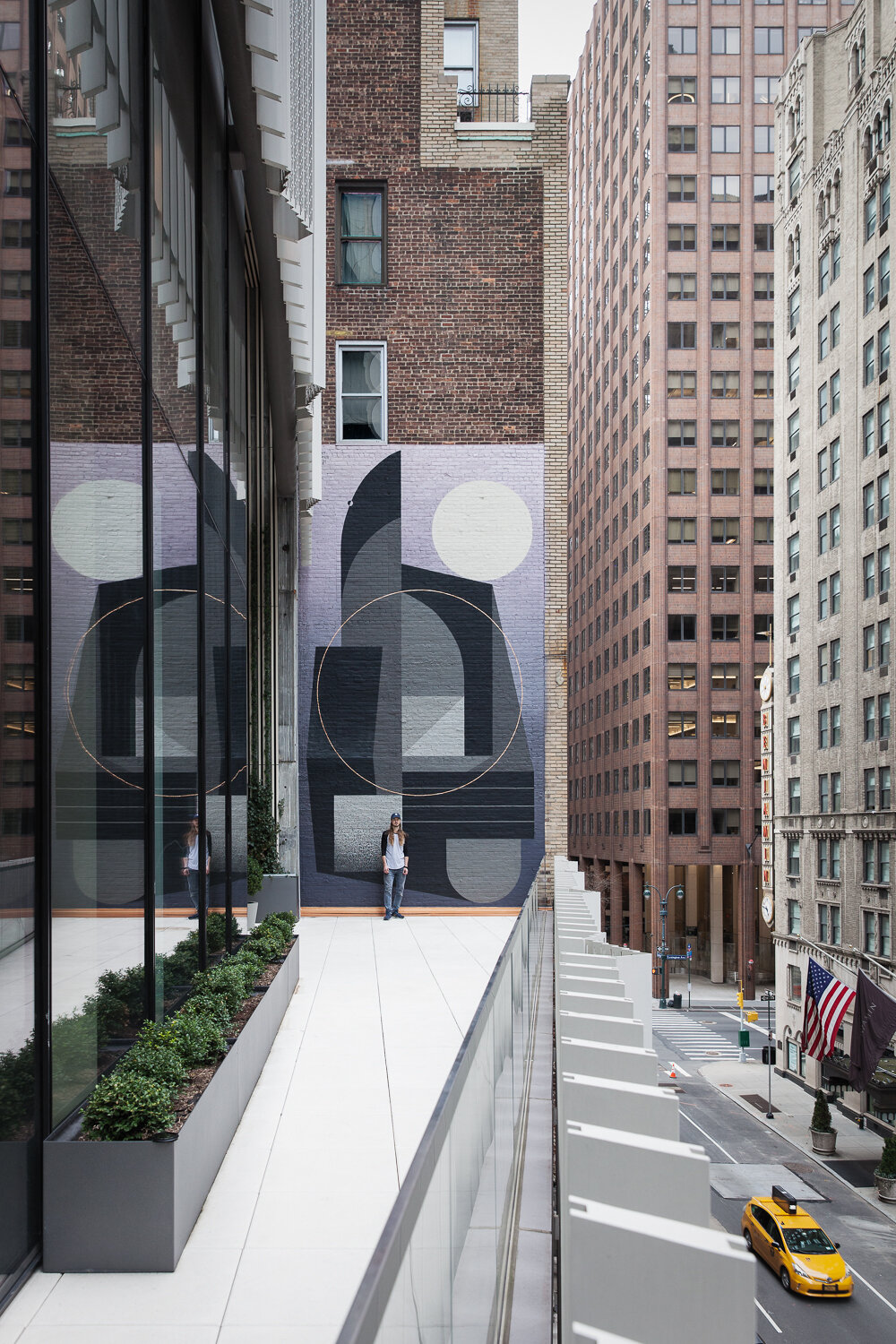 Manhattan based mural and studio artist Tony “Rubin” Sjöman (b.1975) has painted all over the world and his works have been shown in galleries throughout the US and Europe. Sjöman’s roots are in Finland and Sweden and he draws inspiration from his Scandinavian heritage for his complex abstract geometrical murals and studio works. Sjöman has become a staple of the art scene of New York City and beyond. His murals can be seen in a wide variety of spots in and around the city: on churches, in hotels and high-end boutiques, in luxury high-rises throughout Manhattan and on the 69th floor of WTC 4. Sjöman’s studio works are based on canvases, prints and installations and he is no stranger to painting on metal and wood. Rubin's studio works have been on display at Scope New York, Scope Miami and Art Miami during Art Basel, as well as in galleries throughout New York City, Miami and Los Angeles.
WebsiteInstagramFacebookTwitter
WebsiteInstagramFacebookTwitter 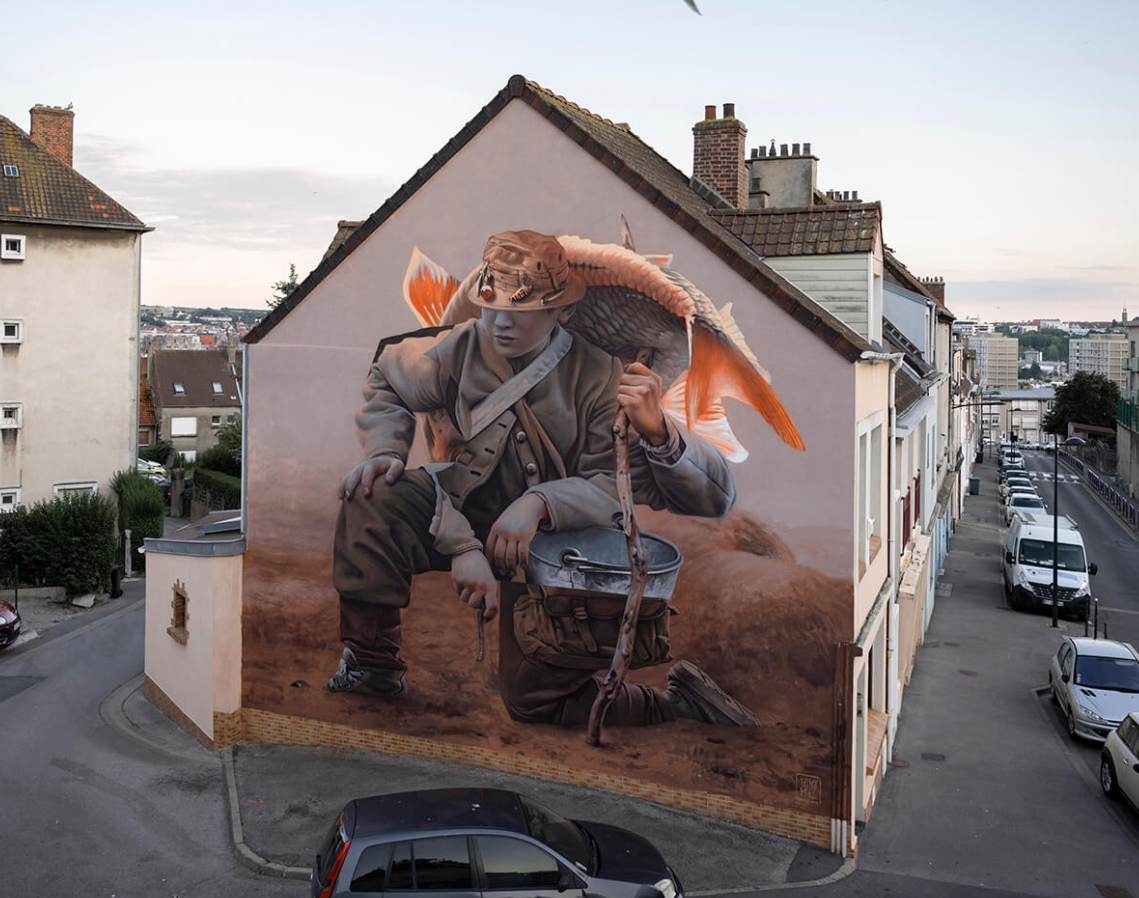 TelmoMiel is a Dutch artistic duo composed of Telmo Pieper (born in Rotterdam, 1989) and Miel Krutzmann (born in Amsterdam, 1984). They are famous for making impressive murals and paintings characterized by hyper-realistic as well as abstract elements. Telmo Pieper and Miel Krutzmann met at the Willem de Kooning Academy in Rotterdam where they studied from 2006 to 2010. Miel, who had been painting walls with spray paint for several years, initiated Telmo to muralism and spray painting. While studying, they created a graffiti crew named Codex Inferno with a third person. It was only in 2012 that they officially created the duo TelmoMiel. TelmoMiel’s work is characterised by its uniqueness, formed by the two different styles of the artists. The work of Miel is rather romantic with picturesque features whereas the work of Telmo is humorous and provocative. Their work also shows a mix of techniques, combining spray paint and paint to create photorealistic, surreal and abstract compositions. Both artists work separately and come together with the sketches to analyse what combinations can be made. The result shows a great sense of technique and style with great attention to perspective and details. Their compositions reference to the human and animal worlds, creating complex creatures and epic scenarios. Their impressive murals aim to bring across peace, humor and a touch of the romance.
WebsiteInstagramFacebookTwitter
WebsiteInstagramFacebookTwitter 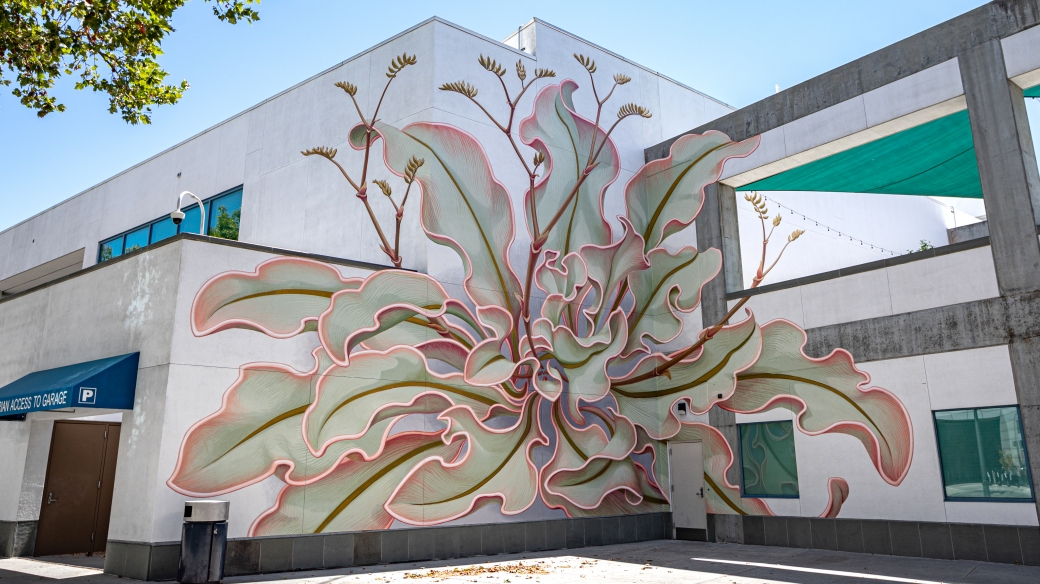 Mona Caron is a Swiss-born, San Francisco-based artist, using muralism, illustration and photography in both her art and artivism. Her focus is on community-informed and site-specific murals in public space. She has created large-scale murals in the US, Europe, South America and Asia, has delved into stop-motion animation as part of her "WEEDS" project, and co-creates visuals for street actions and outreach with social and environmental movements.
WebsiteInstagramFacebookTwitter
WebsiteInstagramFacebookTwitter 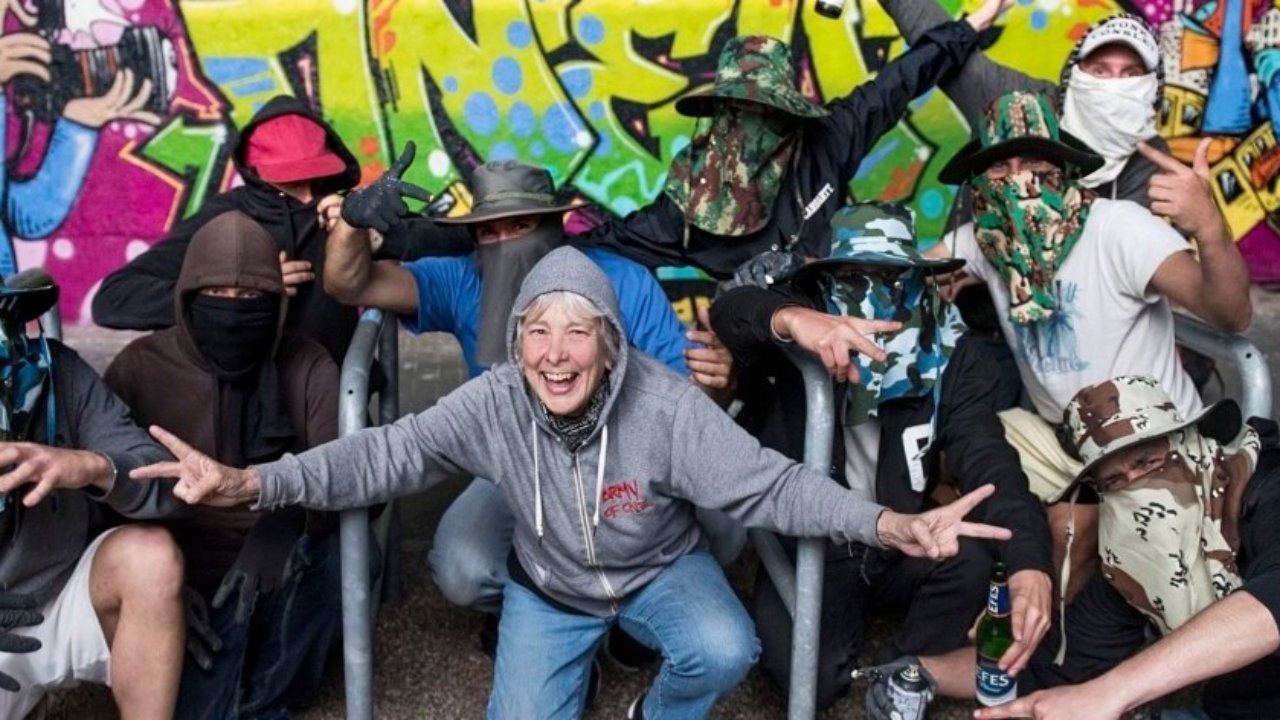 Martha Cooper is a documentary photographer who has specialized in shooting urban vernacular art and architecture for over forty years. In 1977, Martha moved from Rhode Island to New York City and worked as a staff photographer at the NY Post for three years. During that time she began to document graffiti and B-Boying, subjects which led to her extensive coverage of early Hip Hop as it emerged from the Bronx. These photos, published worldwide, helped make Hip Hop the predominant international youth movement it is today.
WebsiteInstagramFacebookTwitter
WebsiteInstagramFacebookTwitter 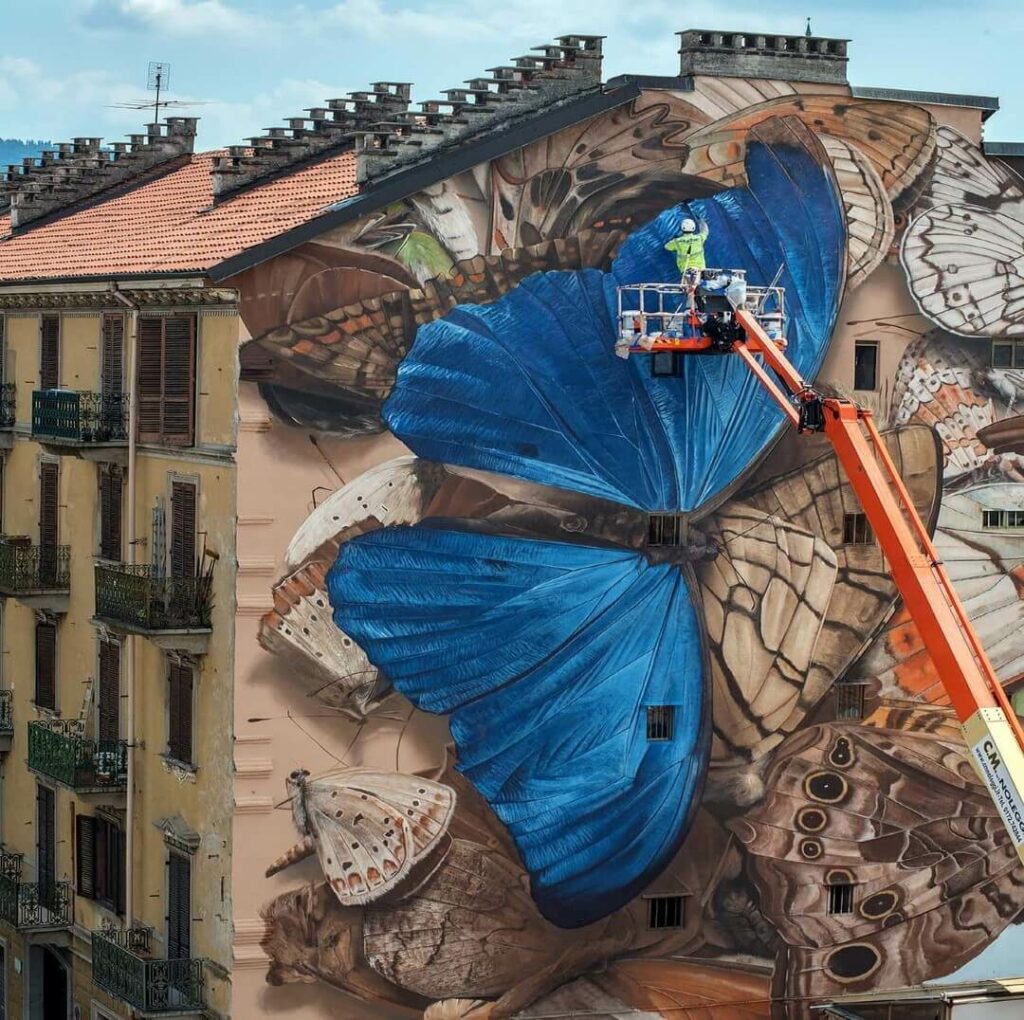 Youri Cansell aka Mantra is a consummate artist and naturalist. While equally adept at painting humans as animals, Mantra is especially fascinated by entomology, the world of insects. Mining memories of his childhood garden in France, he now paints exquisite murals, often of moths and butterflies, on urban surfaces where these ephemeral beings are seldom seen in the wild. With acute sensitivity to his surroundings, Mantra works to create organic relationships between his subjects and their environments. His renderings of infinitely varied species are always spectacularly beautiful and scientifically accurate to the last detail. Poignantly he usually depicts these creatures as lifeless specimens displayed in an exhibit case, a heartbreaking comment on lost biodiversity. From apartment buildings in New York City to an enormous dome in Mexico, I’ve seen Mantra persevere through extreme heat, major lift malfunctions and the usual distractions of creating art in public. His exceptional technical ability paired with his passion for nature and human experience not only enlivens our cities but alerts us to pressing global issues.»
WebsiteInstagramFacebookTwitter
WebsiteInstagramFacebookTwitter 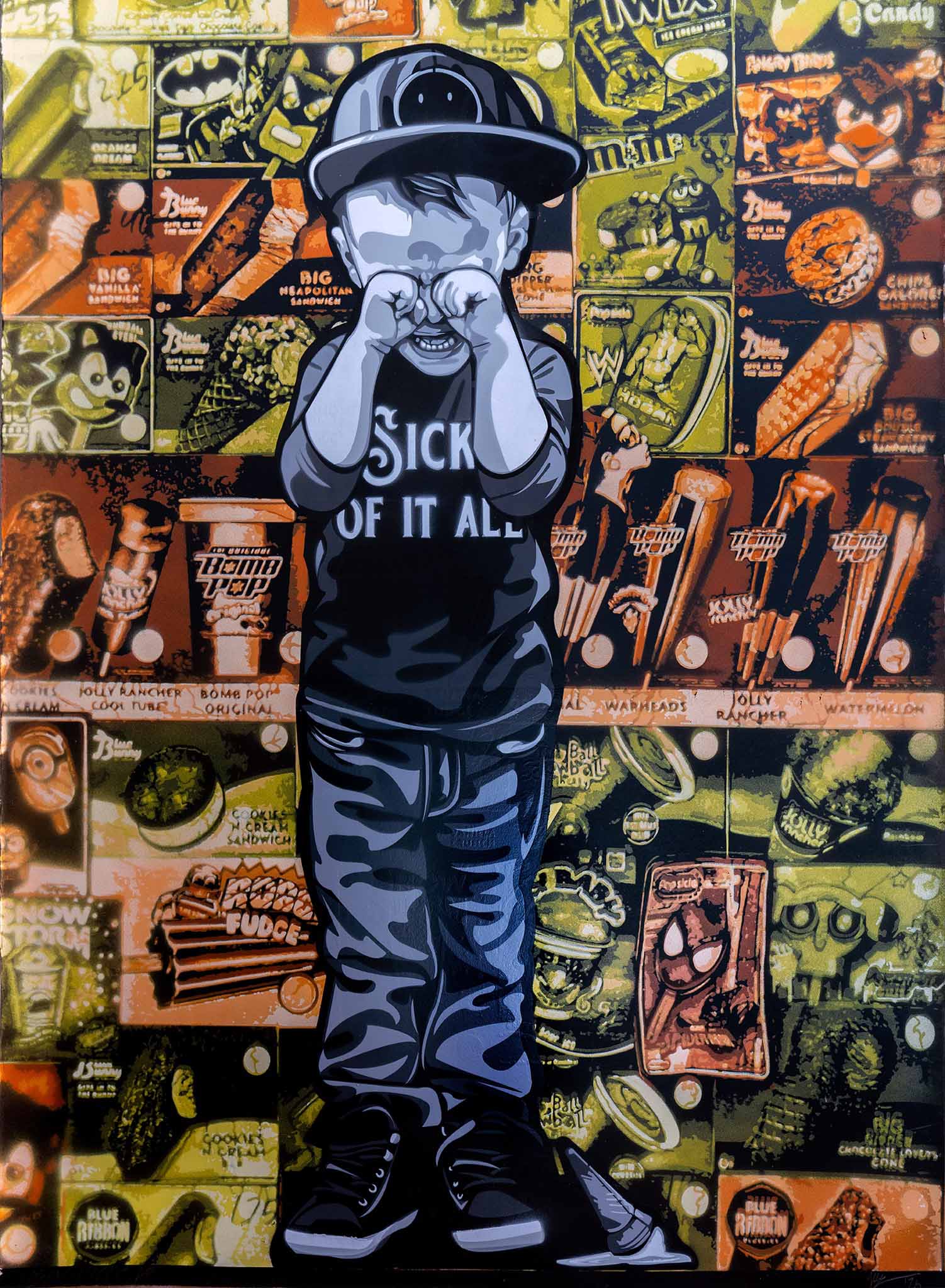 Logan Hicks is an American stencil artist, currently living and working in Los Angeles, California. His hand-cut stencil process involves cutting a separate stencil for each color, then layering each color upon the next until the final piece emerges, often hundreds of hours later, as a hyper-realistic masterpiece. Originally a screen printer, Logan sold off his equipment to finance his migration from the East Coast to the West Coast, turning to stenciling to re-invigorate his printing. Since then he has become renowned as one of the most meticulous stencil artists working today.
WebsiteInstagramFacebookTwitter
Joe Iurato is a multidisciplinary artist whose works are built on a foundation of stencils and aerosol. Falling somewhere in between simplistic and photorealistic, his multi-layer stencils offer a distinctly clean and illustrative aesthetic. While Iurato’s murals have adorned neighborhoods along the east coast United States for years, he’s more recently become noted for the unique placement and photography of miniature painted wood cutouts in public spaces. Utilizing the outdoor environment to create site-specific installations, Iurato creates windows into a narrative formed by personal experiences. Each individual work of art highlights the potential for interaction and storytelling within public space and transforms common land/cityscapes into carefully crafted scenes.
WebsiteInstagramFacebookTwitter

Boom! Salina is an annual mural festival in the heart of downtown Salina, KS. The larger vision is to bring in street artists and muralists from around the world to enhance the visual landscape of our city. The festival is funded through private and crowd sourced donors that share a creative hunger to be bold and inspiring. Boom! Salina is a backed by the Salina Kanvas Project.
Facebook  -->
Salina Kanvas Project Site -->